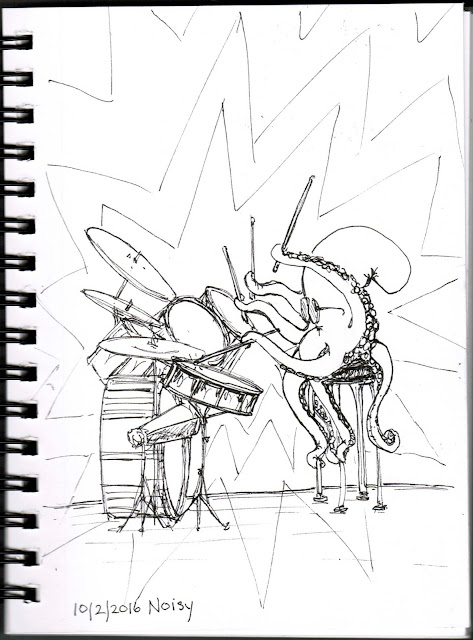 Look I participated in Inktober two days in a row! Here's a  link to Jake Parker's blog  where he explains the challenge. The prompt for October 2nd is Noisy. Thanks for looking.
Post a Comment
Read more 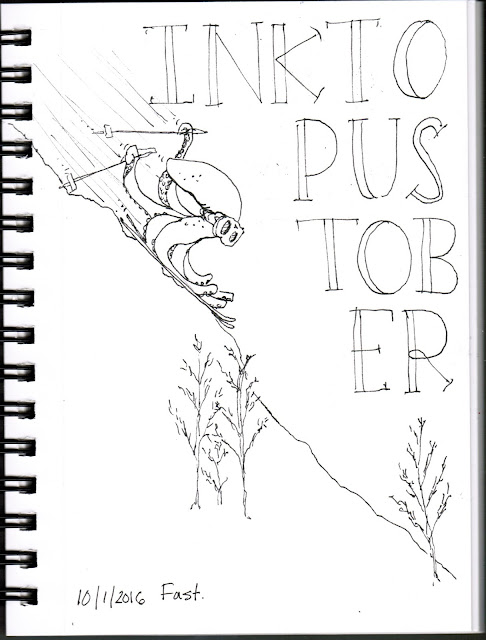 It's Inktober! An ink drawing a day for each day of October. Here's a link to Jake Parker's blog where he explains the challenge. Who else is up for it? The prompt for October 1st is Fast. Thanks for looking!
Post a Comment
Read more

A few drawings from last week 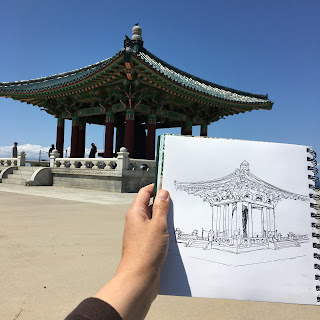 On Tuesday, I went to visit my friend Georgina in San Pedro for lunch. Before lunch, I stopped at the Korean Friendship Bell at Point Ferman. I might be getting better at these "I was really there" shots. The next two mornings, I spent in the Japanese Garden at CSULB. I will definitely go there again. It is free, convenient, and open at 8AM. I didn't finish the first day, and between sittings, all the water lilies opened and this guy showed up. This one is from Newport Beach, on the Peninsula, looking toward Balboa. It was a gray day. This last one was a quick drawing, which I painted later because I ran out of time. I thought the sign was an interesting subject for a quick effort. On the weekend, I went with my family to the Los Angeles Arboretum. It was lovely there. Benjamin and I sat next to a flower and did a quick drawing. I painted this one later too. Thanks for looking!
Post a Comment
Read more

A few pages in my sketchbook 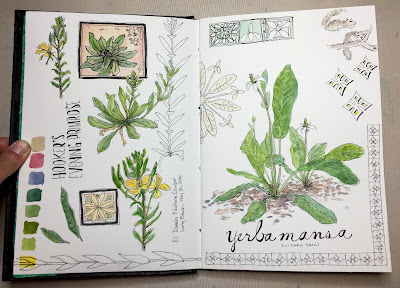 I'm taking an on-line class from Jane LaFazio called Watercolor Sketchbook: Designs from Life . The first week was about flowers and creating a completed page. I started my drawings at El Dorado Nature Center for my first page. Here is the finished page, with designs added. I made some stencil designs from the yerba mansa shape, and made some gelli prints with them. I cut the shapes out of watercolor paper as well. I think I'm going to stitch it on as a flap to the page with the yerbamansa. I drew hibiscus flowers from my back yard for the second page. I also painted some day lilies, but I haven't finished the page yet. The second week's assignment was to draw vegetables. We were also encouraged to make rubber stamps from some of our patterning, but I haven't done that yet. The second week is all about vegetables. I chose radishes. There's even a horse radish. Thanks for looking!
Post a Comment
Read more 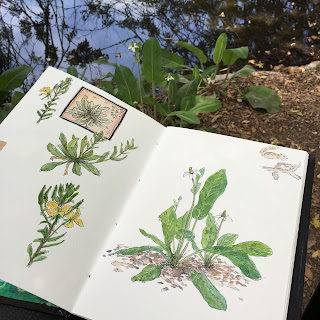 I had a fun day at El Dorado Nature Center today, drawing for my on-line class with Jane LaFazio . I saw an egret, who didn't make it into my sketch book, and two squirrels who did. That park is only two mile from my house, so I'll certainly be back. Thanks for looking.
Post a Comment
Read more 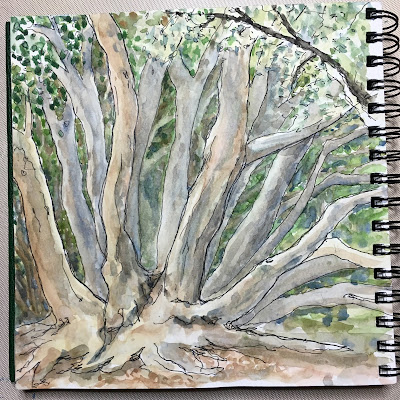 Today I went to the Fullerton Arboretum . It was about 30 minutes away, so I'm not likely to frequent it, but it was a very nice wooded area and garden. There is a historic house of some type there that I planned to draw, but I was so taken by the diverse collection of trees that I decided to go out into the wooded area instead. This drawing took a long time. I had to label the trees in the drawing to keep from getting confused about where the gaps were and where the trunks were. I put numbers on the frontmost trunks, and letters on the next layer back to try to keep them straight. I am taking a Craftsy  class on Travel Sketching, and in one of the lessons, Marc Taro Holmes paints without drawing a sketch by first painting the negative space. I thought to take this technique, but the tree was so complicated I decided to draw it as well. I first painted the gaps between the branches that I did draw. And then between the four frontmost trunks. And then I painting the f
2 comments
Read more 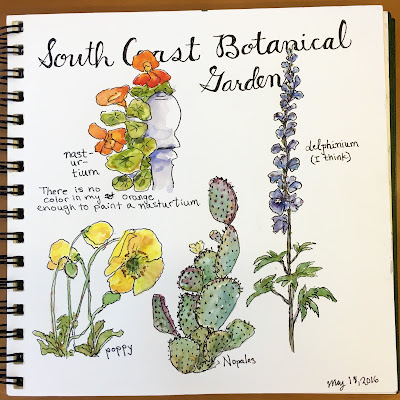 Today I went to sketch at the South Coast Botanical Gardens in Rolling Hills. It was OK, but I found the benches, though plentiful, no pointing in good direction. I took a long time strolling around, and got very little drawing done for the time I was there. A school tour came by and I was happy to become part of the tour. The kids crowded around and asked me questions. "What are you drawing?" was my favorite. Although I was sitting nose to nose with a poppy at the time, the asker decided not to make any assumptions. Thanks for looking!
Post a Comment
Read more 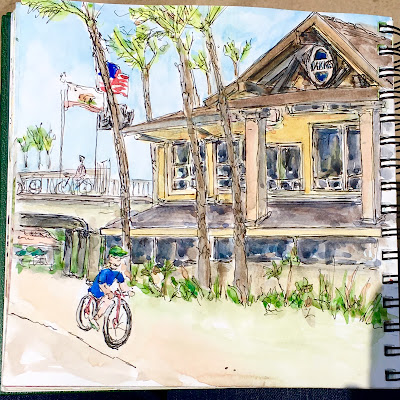 Today I went to Huntington Beach pier and drew Dukes. See, I was really there. I was sitting in my new 7 lb director's chair in the sand next to a slew of bikinied volleyball players. It took me a long time to do the drawing, and I had to take a break for lunch. Here's me hungry, practicing my selfies. Oops the drawing is upside down. Thanks for looking.
1 comment
Read more 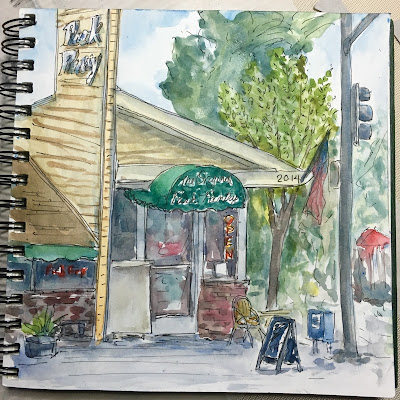 There is a nice neighborhood with large fancy houses and near to no traffic not too far from where my kids take tennis. I sketched there two weeks in a row, and then today, I drove to the end of the street and found a few shops. I bought a coffee so I could sit there, and painted the Park Pantry across the street. I guess I'm fond of the Spanish style houses, since there is quite a variety on 1st street, but I chose similar houses for both sketches. I'm hoping to finish this sketch book this summer. Although I'm getting used to it, I really like the cold pressed cotton paper better than the paper in this book. Still it will be fun to have a book full of sketches. I've filled up a few books before, but not with nice sketches; those are more like notes and scribbles than actual drawings. Thanks for looking.
Post a Comment
Read more 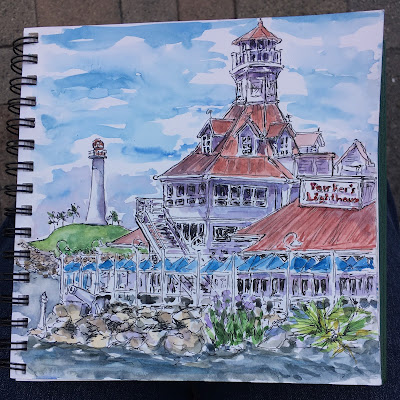 I went to the Marina in Long Beach a few times this week. Today,  I was thinking about joining an urban sketching group from San Clemente, but it's an hour's drive, which means two hours not drawing, so I decided to stay closer to home. I went down to Rainbow Harbor in Long Beach, California. There are loads of interesting things to draw, including boats and buildings, both modern and rustic. It took me a while to settle, and in the end I chose this restaurant, called Parker's Lighthouse.   Parker's Lighthouse - Final sketch I did a bunch of thumbnail warm-ups and three paintings. For the last one, Parker's Lighthouse, I took a few hours. It was a very complicated building. First I drew it in pencil, then I added ink, and then I watercolored the image. I took pictures between each step so I'd have a record in case I screwed it up. Parker's Lighthouse - pencil sketch Parker's Lighthouse - inked I tried to get a photo of my drawing and the bui
Post a Comment
Read more 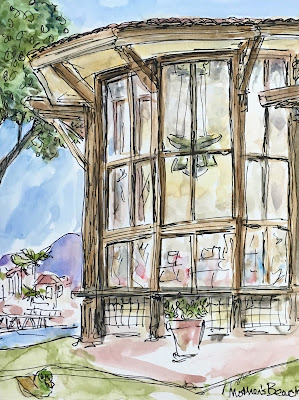 I went to Mother's Beach while my kids played tennis this afternoon. I drew a kiosk that sells hamburgers in the summer. It is an odd shaped building, but a nice spot. A duck came and sat next to me for most of my sketch. I guess it wanted company. Or food. Thanks for looking.
Post a Comment
Read more 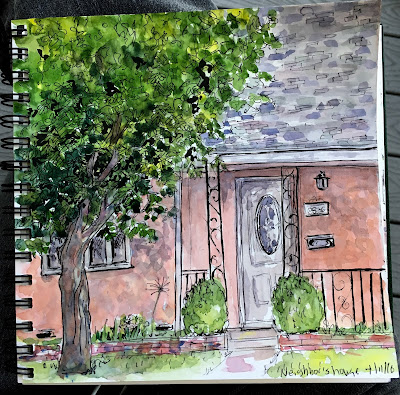 Today I sketched from my porch. Here is the house and tree across the street. I spent a lot of time thinking about leaves in this one. Here are some close-up's. Between the leaves and the bricks,I got a lot of texture in this drawing. Thanks for looking.
Post a Comment
Read more 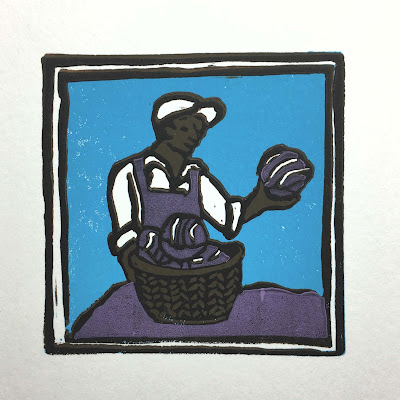 I watched this video by Canadian printmaker,  Linda Cote , and thought I'd try my hand at reduction printing. I thought I'd be able to make myself keep it simple by doing a small one for my first attempt, but I still drew quite a complicated image. The final print is only 3x3 inches. I printed the last two layers on their own as well. Watch Linda Cote's video to see what reduction printing is. For my image, I first sketched it in my sketchpad. And then I scanned it into the computer and traced it in Photoshop (and reversed it because, uh, I don't know why). Then I printed the image and transferred it to an easy carve rubber block for carving. I learned a lot doing this. I am looking forward to doing another one. Thanks for looking!
Post a Comment
Read more
More posts