I did some Gelli prints last night, combining three ideas. Two were techniques for the background of a print, and the third was to ghost print a piece of origami. 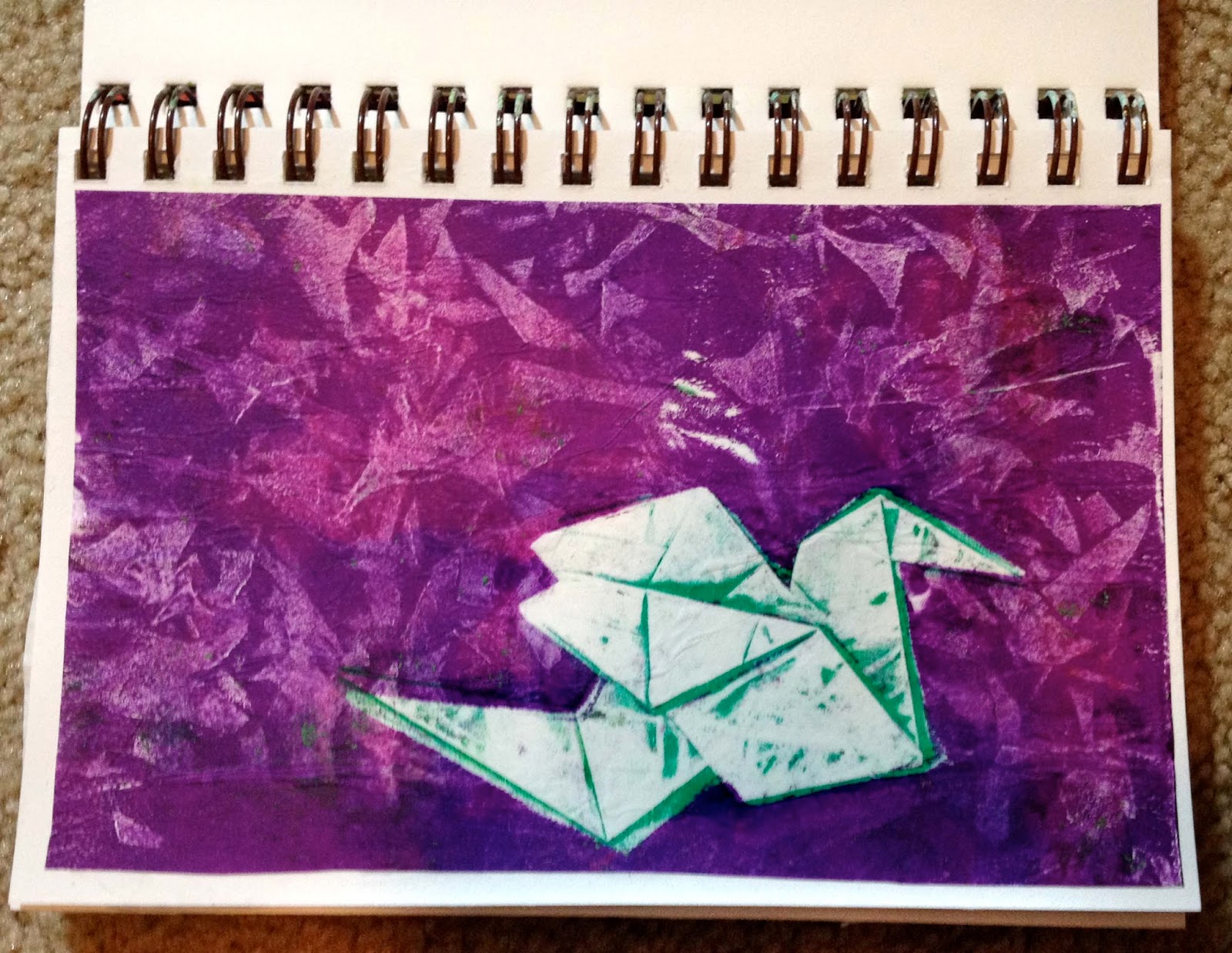 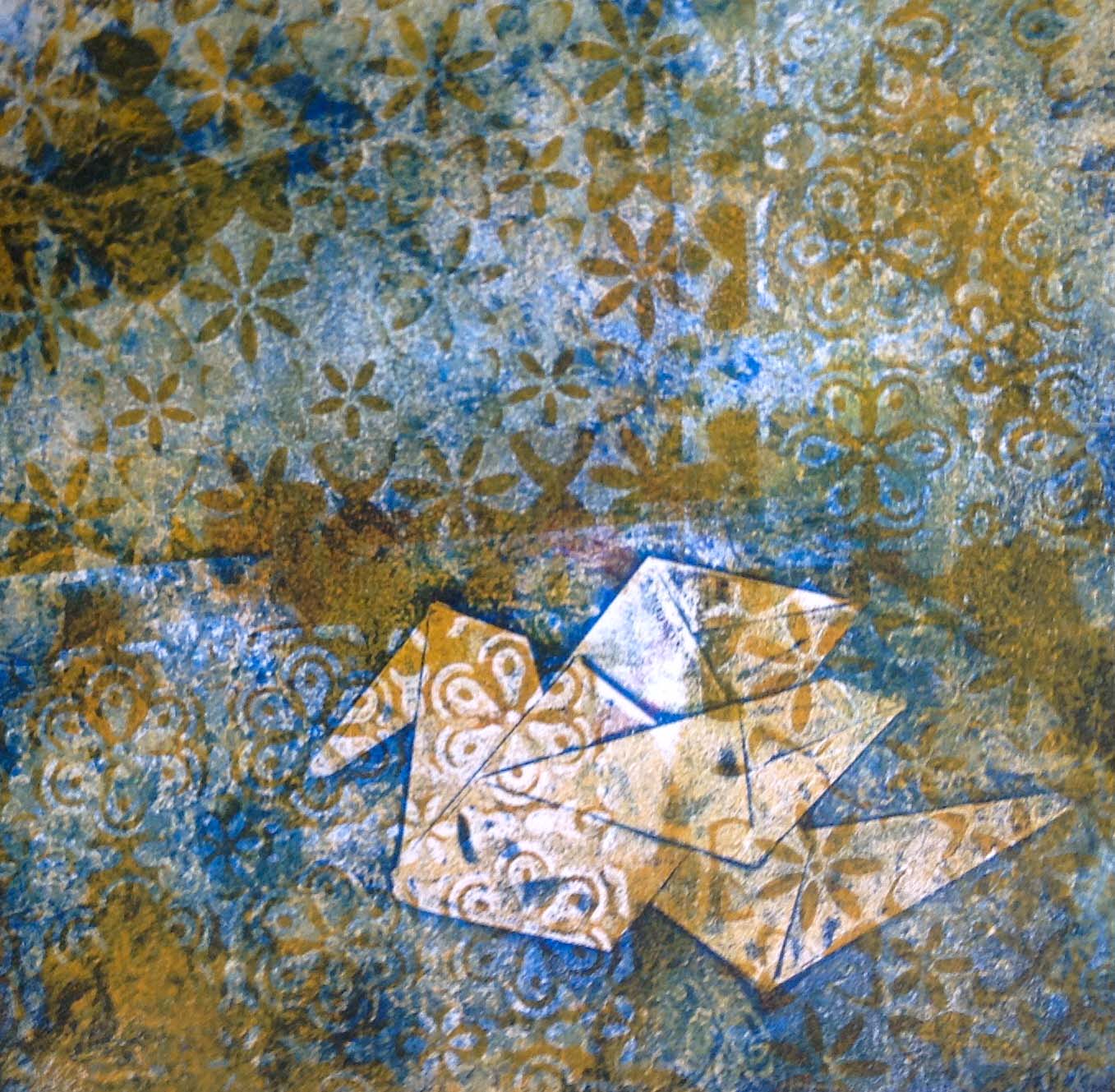 Experiment #1: Making a stamp from interfacing

I saw this blog post, about making a stamp of sorts out of fusible interfacing, on the Gelli Plate blog, and thought I'd give it a try. I fussy cut heavy, double-sided, fusible stabilizer to make some background stamps with flowers and leaves.

I print on mixed-media paper and on deli paper. Today, I spent a lovely afternoon at the Art Lounge putting my more successful efforts into my art journal. The white of the journal page made the leaves pop through the somewhat translucent deli paper.

In addition to the stamps with leaves, I took the handfuls of little scraps of interfacing from my cutting and ironed them onto a backing to make the abstract stamp that I used to make the purple origami print at the top of this post. That's my favorite of the stamps; it goes very well with the origami, as it looks a bit like crumpled paper.

At some point, I tried using the embossing folders right on the Gelli plate, which worked to make a texture, but was a pain because I got paint on my folder that needed fairly prompt attention. This time, i embossed a piece of mixed media paper and used the paper to make textured prints on my Gelli plate. It worked spectacularly well.  I love finding another use for something I already own!

I used an origami dragon to make these prints. It took me many tries to find the order and number of prints to get the look I was after. In the image below, you can see the well painted piece of origami next to a print (which I evidently made with the wings folded to the other side).  The process for this one included a miraculous act of registration, but the image is good to show the ghost printed creases in the print. 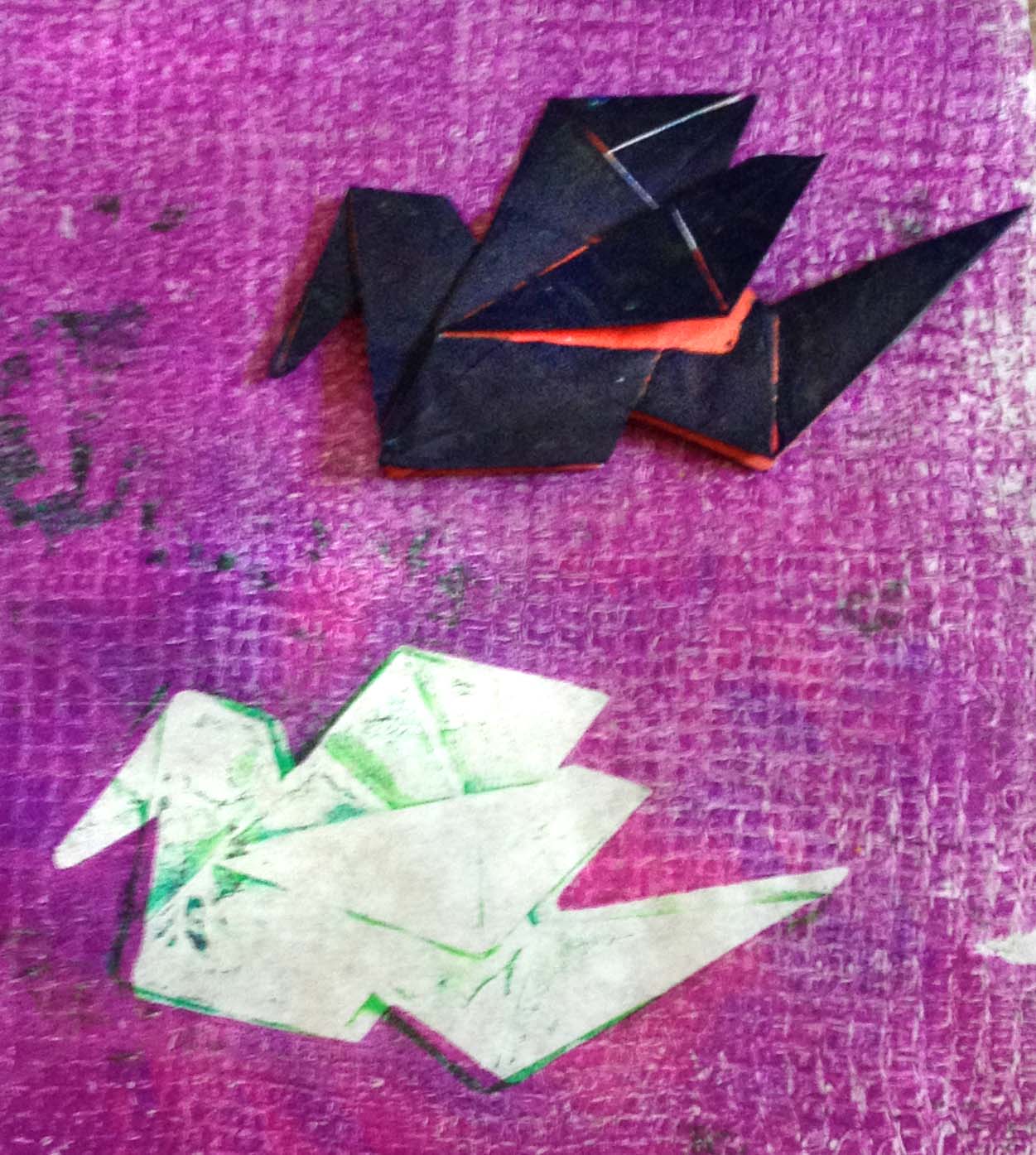 One thing I learned was that I would be happier if I glued the layers in my piece of origami, so the flaps didn't peel back and unfold when I was removing it from the plate. It also would have been much easier if I added a waterproof coating to protect the origami. Treating the paper of the origami is going to become step 1 of the process, next time around.

Here's what I did on my most successful prints:  First I inked the Gelli Plate with the color and texture for the background and pulled a print.  That background became the origami paper in my image, and showed through in the background of the whole print.  Then I inked the plate with the color that would make the creases in the final image. I placed the origami image onto the inked plate, pressed it down firmly and removed it. Then I pulled the final print, effectively making a ghost print from the piece of origami.
I'm excited at how well this works, and am surfing my origami books for good images to print. There a seahorse that looks great, but I'm not sure I can fold it successfully!

Thanks for looking!
Posted by Florence Turnour at 1:02 AM 6 comments:

Stuart and Benny at the Art Lounge

I've been taking mixed media classes with Marah Johnson at the Art Lounge (facebook) in Huntington Beach  off and on for a couple of months. The shop is great and Marah always has loads of tools, inks, paints and ideas, so I keep signing up for more. Today I took my kids for an afternoon of art with Marah. The each worked on canvases, making a large sihlouetted image. 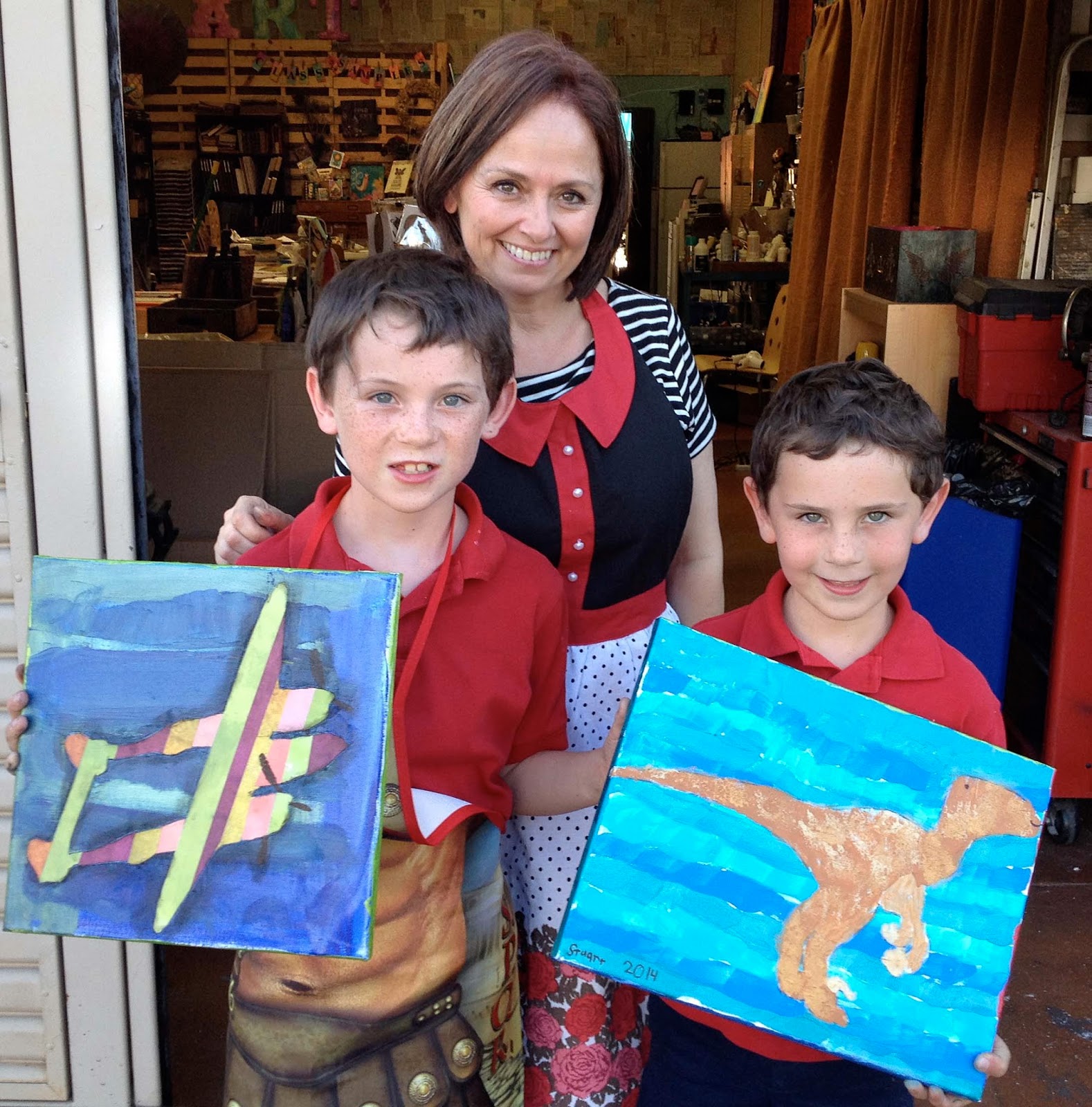 First the boys painted the backgrounds. The two boys had visions for their designs, and dove right in. 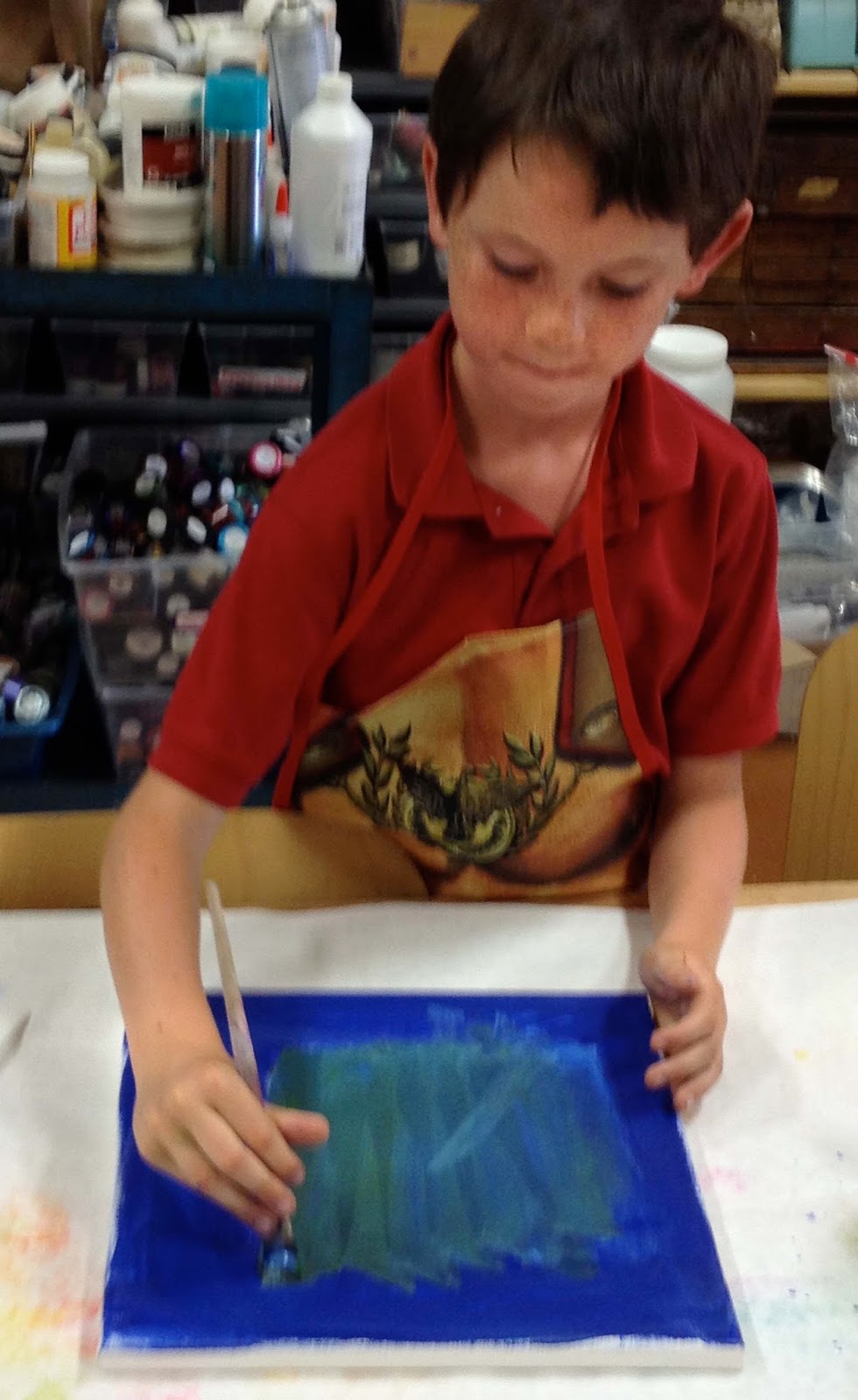 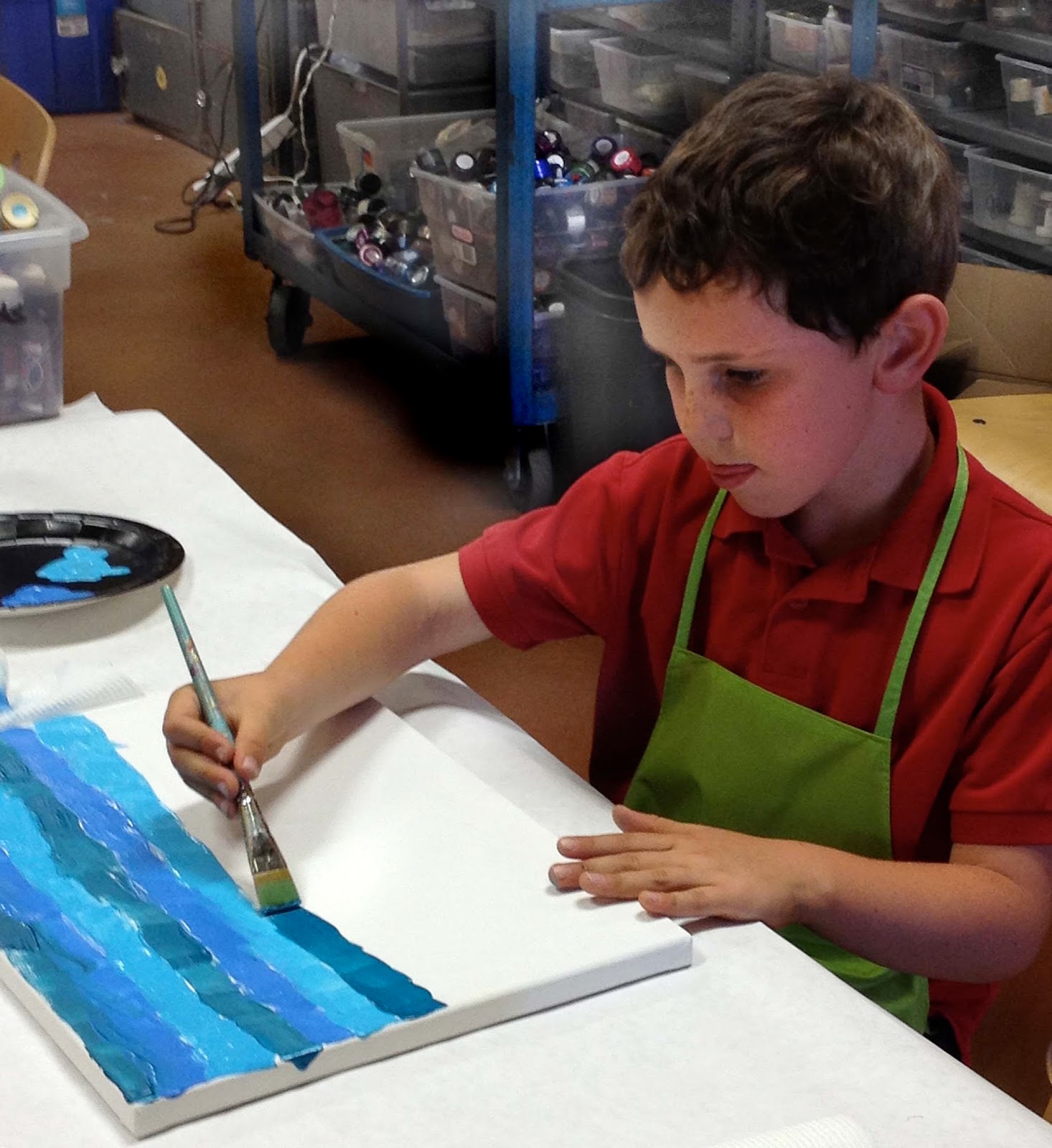 After drying their canvases in front of the fan, they traced their stencils. Marah had a variety of silhouettes ready, but my boys had their own ideas. Stuart wanted a velociraptor (dinosaur-- it's all about the toe claw) and Benjamin wanted a P-38 Lightening (airplane). 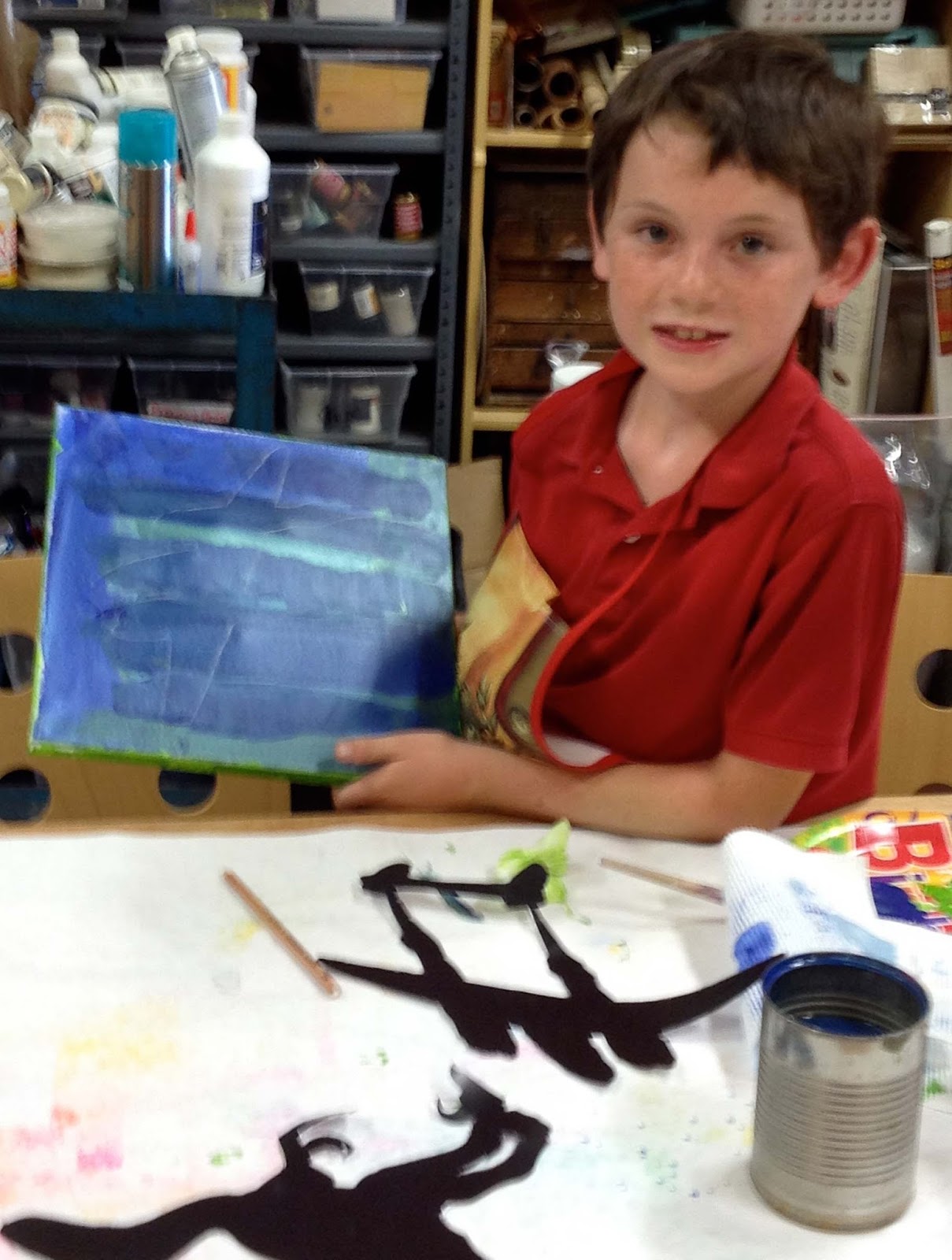 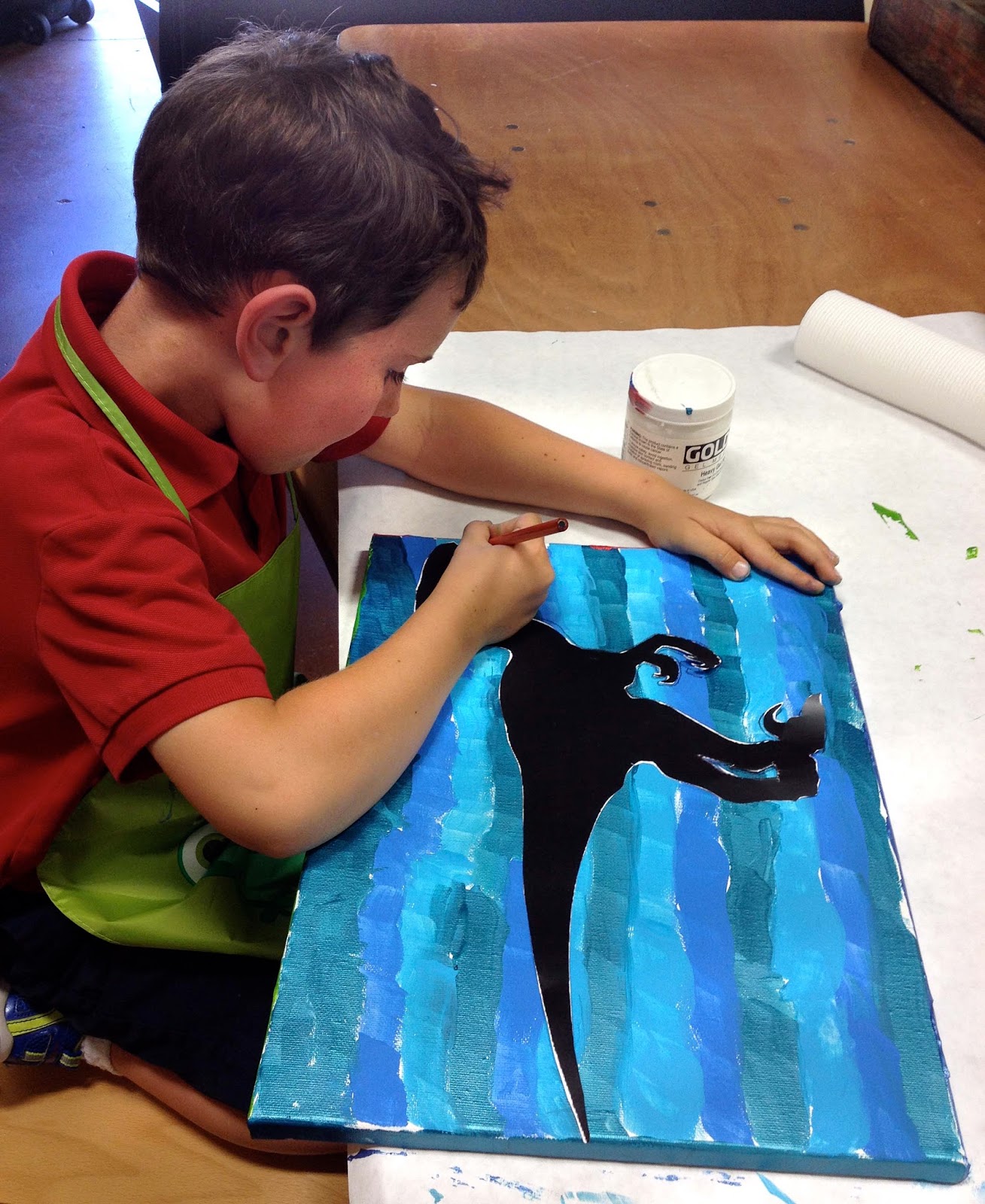 Stuart painted in his outline, first with gesso and then with shiny tan paint. Benjamin cut strips of paper to fill his outline, which was Marah's original concept for the project. She noticed how much Stuart enjoyed painting when he did his background, and asked him if he wouldn't prefer to paint, and he took her up on it. 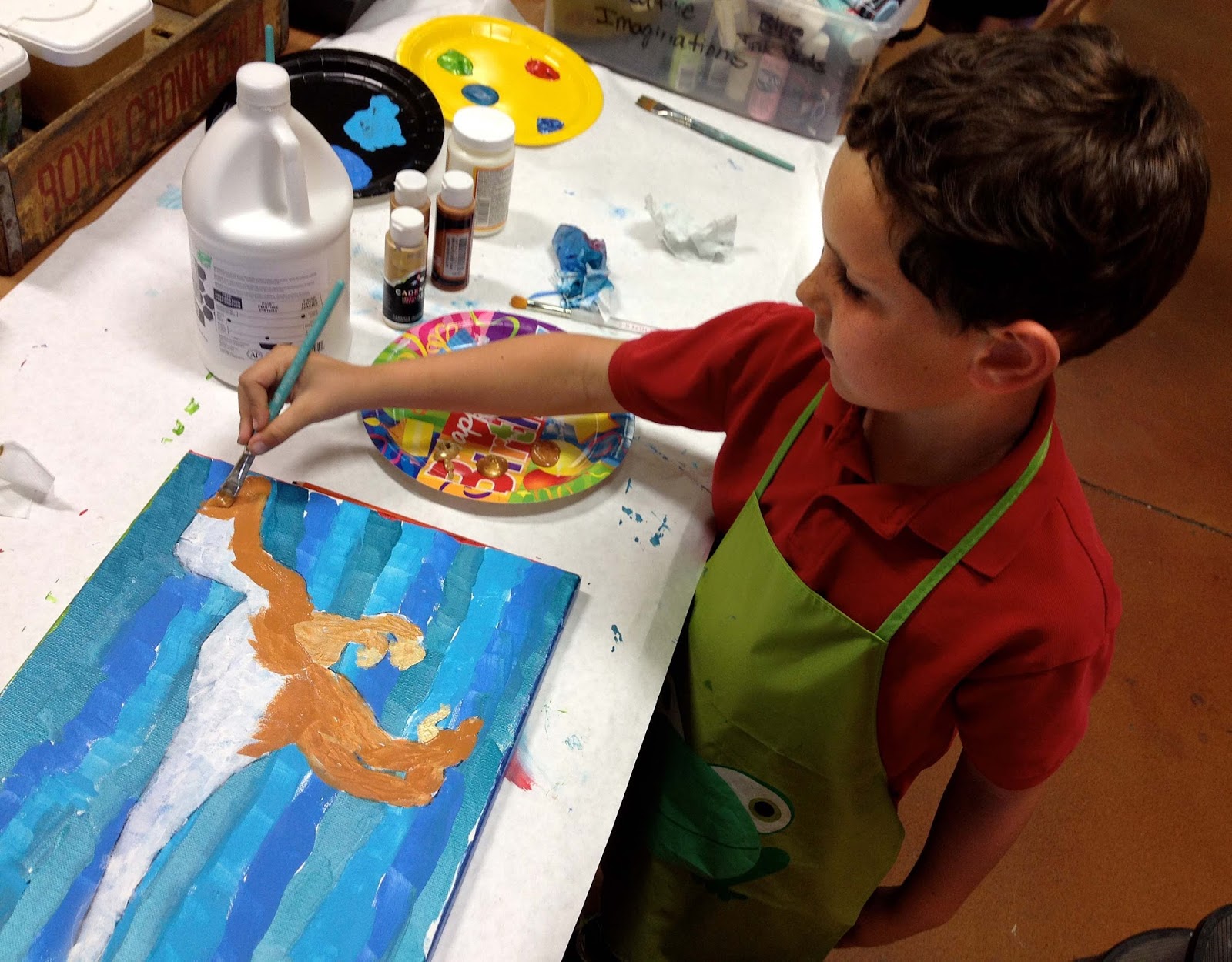 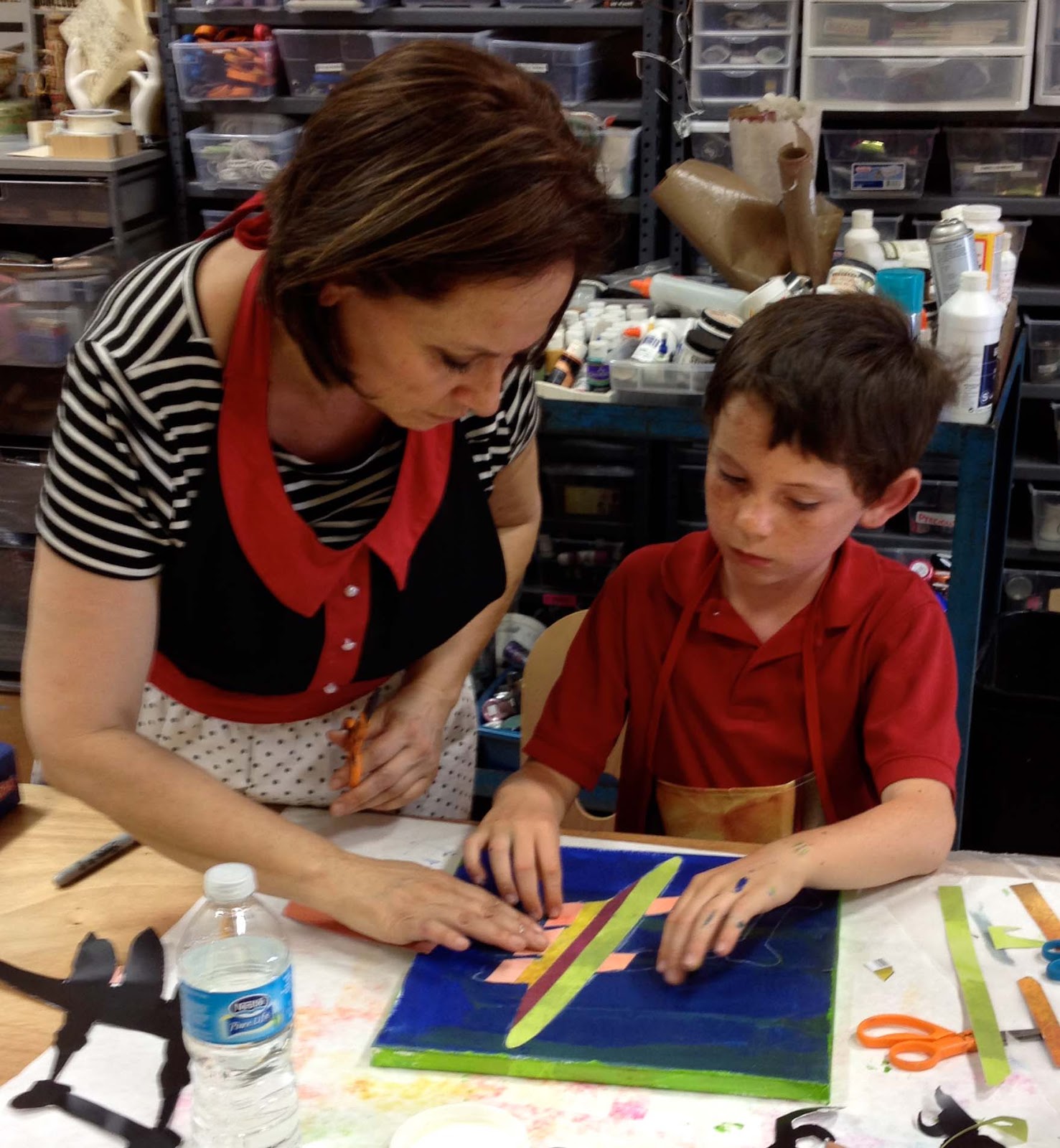 Benjamin finished his with some contee crayon shading, and Stuart added an eye and a mouth with a Sharpee marker. 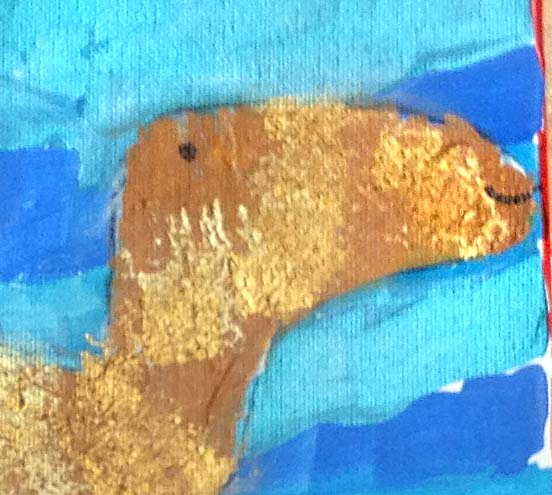 Then they were done! 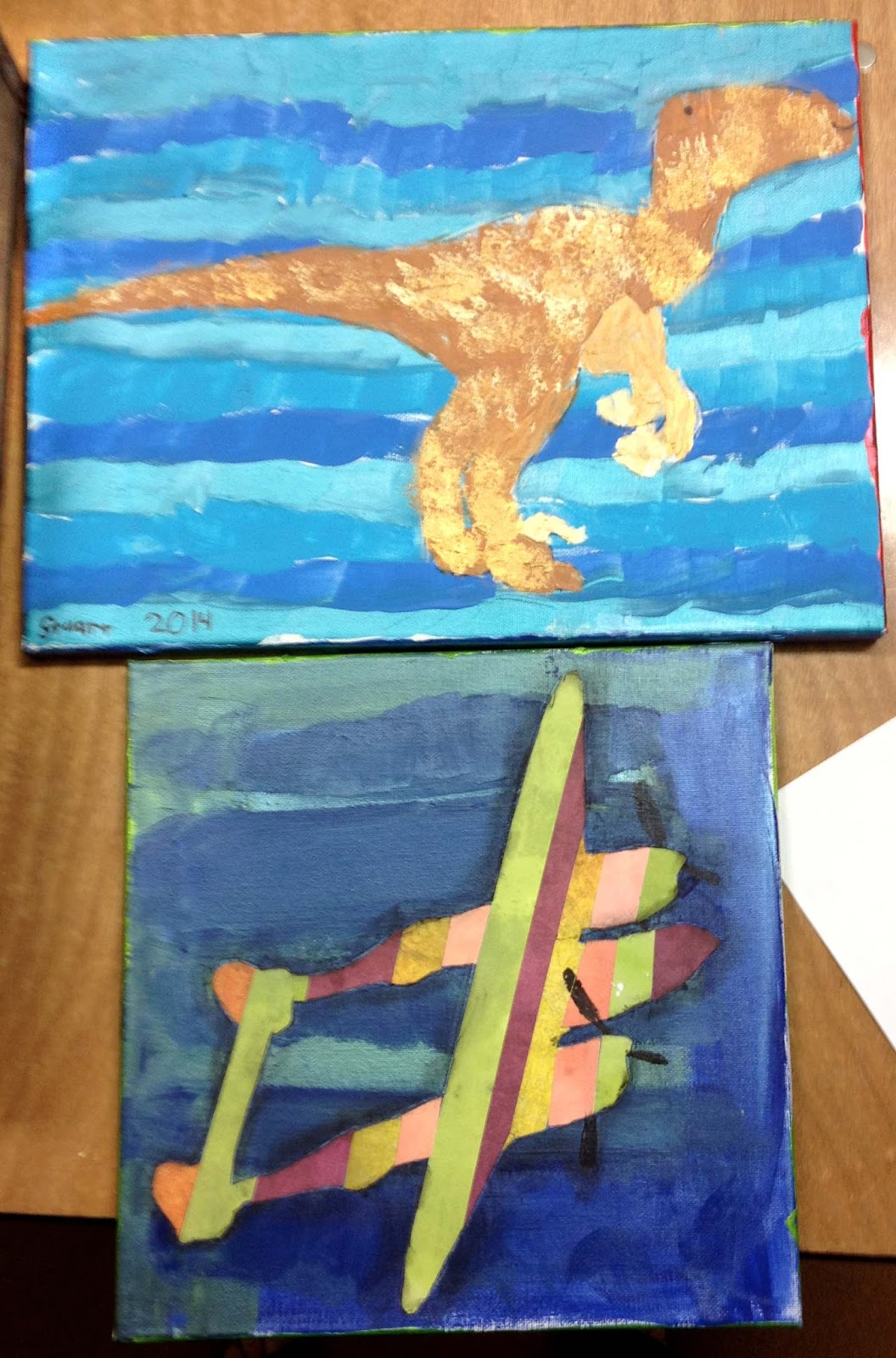 Thanks for a great afternoon, Marah! And thank you for looking.
Posted by Florence Turnour at 9:20 PM 1 comment: