"What are you doing, Mommy?"
"Looking at my computer."
"But *what* are you looking at?"
"This company has card making contests on their website. You make a card and then take a picture of it and link it into their site."
"But what happens to the card?"
"You keep it."
"WOW! You get to enter the contest AND keep the card?! I want to do that. What do I do?"

Look out JustRite Friday Challenge Number 76, here comes Benjamin! The theme this week is stars and stripes. Benjamin sorted through all the JustRite stamps I have and picked out the Make a Wish sentiment from a retired JustRite Original card making set (because of the stars). I told him he had to start with a sketch. He drew this (and we accidentally used it as a place mat when we sponged red ink onto a die cut). 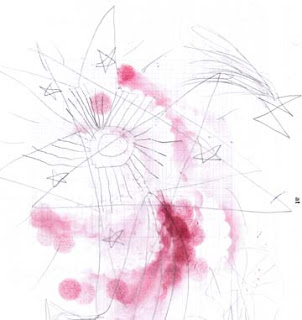 He described it to me very carefully. He wanted a star shaped card, with stripes radially out from the the sentiment in the center, and star paper out on the points. When we chose paper, he decided to put the stars in the middle and the stripes on the points.

I helped him cut out the points with the paper cutter, and then he played with the Spellbinder dies until he had a layered stack he liked. He cranked them through the Cuttlebug, and I helped him assemble it.

"I think it needs something. You know. Something."
"Like bling?"
"Yeah. Like bling. What's bling?"
He selected some Want2Scrap rhinestones and stuck them onto the tips. "There. Now it's done." And then, "Hey, this bling says Want *2* Scrap, with a 2. Get it?" Yes, actually, I do get it. Thanks.
Thanks for looking!
Posted by Florence Turnour at 6:50 PM